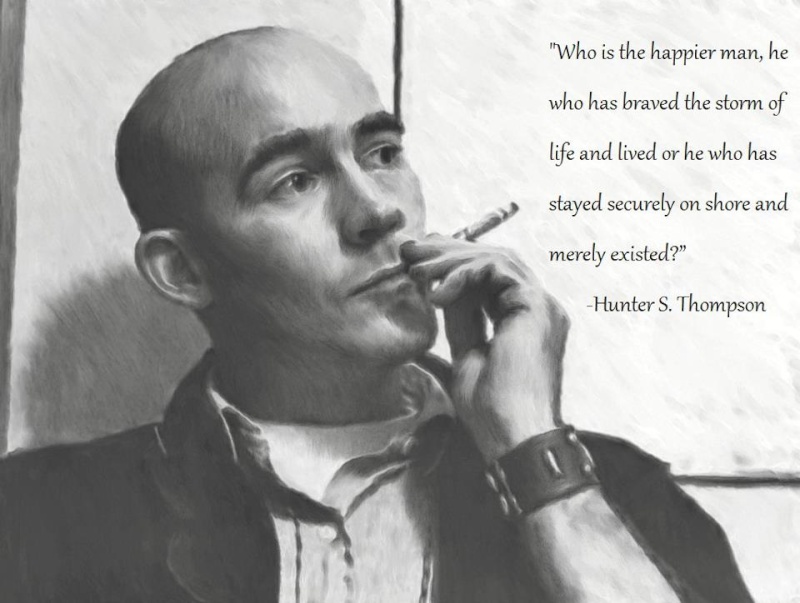 10 years ago one of the greatest writers to share his talent with the world left us.  On February 20th, 2005, Hunter S. Thompson shot himself.  He left this note which was later published by Rolling Stone:

The reckless, wild, and insatiable Dr. Gonzo had unfortunately had enough.  As it is the anniversary of his death I felt inspired to write about why I love him so very much.

Most people who know me know that he is my absolute favorite writer.  I have a collection of his books (one of which is in my bag at this very moment) and I have one of my favorite quotes of his tattooed on my ribs; Buy the Ticket Take the Ride.

Hunter S. Thompson was not the sanest of people and he had quite an appetite for alcohol and drugs that I don’t think people even do anymore.  It’s remarkable that he died by his own hand and not by an overdose.  But his fondness for whiskey is not the reason I admire him; his ability to see a forest where someone sees a tree, his lack of fear of offending people with the truth, and his ridiculously twisted sense of humor are why I devour his books.  There are no other writers quite like him.  His free-spirited attitude and his way with words are what caused me to pick up his book for the first time, and those words inspired me to write.

In a day and age where the ability to express yourself is so readily available, it’s remarkable how hard it can still be.  Social media allows people to portray who they want people to see them as on the Internet, but when it comes to the every day, the in-person, and the self, people start to put back up the walls they fearless tore down on a screen.  Why is it so hard to be ourselves?

Even when I write for my own blog I tend to censor myself because of fear of what someone reading it will think.  I can’t say “fuck” because I put the link to my blog on my LinkedIn profile.  I have to back everything up with saying “it’s my opinion” so I don’t offend anyone.  Well fuck that.

One of the reasons I created this blog was to have a place to put all the rants, raves, and epiphanies that bounce around in my head in hopes that by reading it I can try to make sense of it all.  My other hope is that others will read the things I’m able to get out of my head and onto paper (then transferred to online) and find some wisdom in it all.  The things that happen that cause me to write are messy, exhausting, and sometimes pretty crazy, but that’s what makes them interesting and that’s what makes them worth reading so why censor it?

There are many instances when I cringe at something Hunter S. Thompson wrote in his books.  I think “How can write that?  People are reading this!”  He didn’t care, and that’s what made him such a remarkable writer and journalist.  His work wasn’t (always) intended to be offensive but it occasionally does offend people because it’s not sugar coated.  It’s raw, real, and 100% authentic.  I’m always drawn to reading books and articles about things that can be a little hard to read or make me think “Wow that was a bold choice of words”.  Those were things worth writing about because they meant something to the writer.  Writers and other creative types experience life in a more extreme way than most people, which is why they are compelled to express it.  It’s almost like having a secret that you can’t keep to yourself, although sometimes it not a ‘secret to life’, it’s an extreme experience, emotion, or reaction that has get out.  It’s then the writers choice whether to share it or not.

I think Hunter S. Thompson summed it best when he said, “One of the few ways I can almost be certain I’ll understand something is by sitting down and writing about it.  Because by forcing yourself to write about it and putting it down in words, you can’t avoid having to come to grips with it.  You might be wrong, but you have to think about it very intensely to write about it.  So I use writing as a learning tool.”

Whenever I tell people about this site, the first question they typically ask is “What does ‘bro chick’ mean?” I included the section found in the header of this blog for just that reason, but I wanted to elaborate on it further.  Urban dictionary defines  a bro chick as “a girl who will sit back, drink beer, play video games and football with you, and still spend 5 f**king hours doing her makeup.”  Well said Urban dictionary, well said.  The nickname was given to me because I say and do things like the following:

“I really want to watch the football game at 1pm, but all the good produce at the farmer’s market will be gone by 2pm.  Ahhhh.”

“I want to look pretty but I don’t understand how hair curlers or eyelash curlers work.”  Pretty much any beauty tool seems more like a weapon than a make-me-pretty device in my opinion.

I cannot walk in heels.  I look constipated.

I don’t watch sports to look “cute”.  I have genuine interest in this game and have a lot riding on it for my fantasy team.

Other women think dude friends want something “more” than friendship from women.  Not the case as with my friends I am seen as a non-sexual object, like a little sister.  Or a lamp.

On that note, once you become a non-sexual object all the vulgar stories and gross behavior men do without the presence of a female comes forth.  For you are now another bro and things like pooping and girl’s nipple sizes become frequent topics of discussion.

In college I was frequently handed Mike’s Hard Lemonades or Smirnoff Ices instead of beers.  Now I frequently have to pipe up when the bartender looks around and says “Who ordered the whiskey?”  I did, no Cosmopolitans here.  No sir.

“No that’s his salad.  I ordered the bacon mac and cheese.”

Interrupting thoughts such as “I can’t believe Eli threw four interceptions last night.  So awf…oh man I need a manicure.  My nails look like a farmers…I wonder how many calories are in this smoothie.  Who has a bye week next week?”

A bro chick is a unique hybrid between a guy and a girl; she will manage your fantasy football league and then buy a wildly over-priced pair of rain boots because they’re “in” and “functional”.  She will wear a cocktail dress and drink beer until the dress gets too tight which is when she will promptly switch to whiskey.  She is your drinking buddy, your wing-woman, and your bro with boobs.  Do not be put off by her lack of interest in hairstyles and fashion for she will make up for that with her sweet baking skills.  She is sarcastic, she is unique, and she is writing this post.